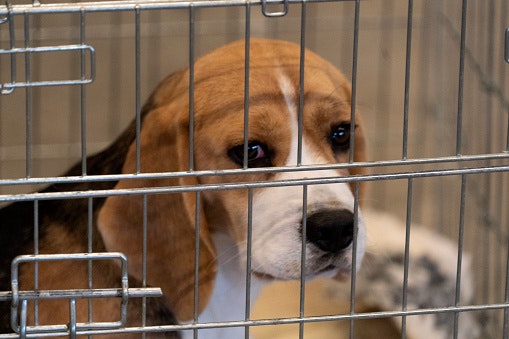 Beagles have been used in laboratory experiments since the 1950s. But why this particular breed of dog above others?

Sadly, according to industry journals, it’s simply because of their ‘good behavioural characteristics’, ‘docile temperament’ and ‘their size’. What a terrible price to pay for being such a good dog.

Originally bred in the UK as a small hound to accompany those hunting on foot, beagle ancestry can be traced back to the fifth-century BC in Ancient Greece. In more recent times, William The Conqueror was the first to bring a much closer relative to Britain in the eleventh century. But it was an American General, Richard Rowett, from Illinois that introduced the beagle to the USA in the 1800s, and it was in the US where their journey began as the preferred breed for animal experiments.

The first beagles to be purchased for experimentation was by the University Of Utah on April 3rd 1951. By March 1952, the university had bought 61 beagles and started a breeding program of their own. By 1960, 671 beagles had been bred, from just 32 breeding pairs, to be used in the university’s radioactive toxicity experiments.

To this day beagles are still being used for laboratory experiments in the US and UK mainly to measure how various toxins, from pesticides to pharmaceuticals, affect humans. In 2019 reports suggested that there are around 60,000 dogs kept in laboratories in the US and 2,626 in the UK.

An undercover investigation by the Humane Society revealed the horrific torture that these gentle dogs are routinely subject to. One particular beagle, Harvey, who the laboratory staff had unusually named rather than just giving him a number due to him being a “good boy” and particularly “adorable”, was witnessed having his chest cavity opened and two types of chemicals poured into it. As in the majority of cases, the results of this test could only be studied post-mortem so Harvey, and twenty other beagles from the same experiment who were also infused with chemicals that humans are very unlikely to ever come into contact with, either died as a result of the toxins or were killed soon after.

Harvey was allowed out of his tiny cage to run around in a corridor for a few minutes before being euthanised, prompting a laboratory worker to describe that specific act as being, “The best life he knew.” Laboratory dogs are usually killed by asphyxiation in order to not interfere with the information their bodies contain.

Another undercover investigation by Direct Action Everywhere (DxE) into a US facility that breeds beagles for the sole purpose of selling them to laboratories, revealed conditions so horrendous that they couldn’t be differentiated from similar facilities that they’d investigated in Asia where dogs are bred solely for the meat market that westerners are so up in arms about.

The truth is that despite the many years of animals suffering in this way in the name of human healthcare advancement, 90% of any discoveries made fail to lead to successful treatments.

A 2015 article published by the Cambridge University Press entitled, The Flaws and Human Harms of Animal Experimentation, stated that, ”The unreliability of applying animal experimental results to human biology and diseases is increasingly recognized. Animals are in many respects biologically and psychologically similar to humans, perhaps most notably in the shared characteristics of pain, fear, and suffering. In contrast, evidence demonstrates that critically important physiological and genetic differences between humans and other animals can invalidate the use of animals to study human diseases, treatments, pharmaceuticals, and the like.”

A report by People for the Ethical Treatment of Animals (PETA) also suggests that many drugs that could potentially prove successful in helping humans are discarded because they fail in tests on animals. PETA also revealed that the National Institute for Health in the US readily admit on their website that, “Therapeutic development is a costly, complex and time-consuming process. The average length of time from target discovery to approval of a new drug is about 14 years. The failure rate during this process exceeds 95 percent.”

With growing evidence that animal experimentation leads to a less than 5% success rate, and with ethical alternatives such as in vitro human cell and tissue testing and advanced computer-modelling techniques, is it time we put an end to this barbaric and cruel practice? Here’s how you can help:

Despite this petition to government to Ban Animal Testing in the UK already receiving more then double the signatures required, and is scheduled to be debated in parliament on the 18th October 2021, you still have until the 12th of October to add the weight of your own signature HERE.

More signatures are needed for this petition to government, championed by Ricky Gervais and Peter Egan, to Change The Law To Include Laboratory Animals In The Animal Welfare Act HERE.

Read an article about Ricky Gervais’ lobby for a ban on all animal experiments HERE.

Find out more about the Humane Society’s undercover investigation HERE.

Find out more about the failure of animal experimentation in regards to advances in human health care HERE.

Find out more about the history of beagle experimentation HERE.